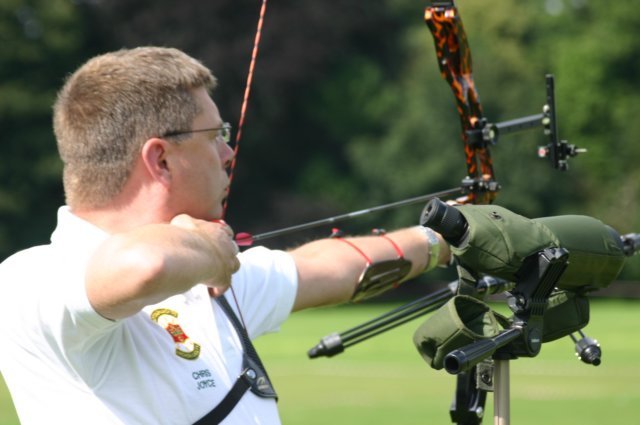 As another outdoor ends we have the opportunity to review this year’s competitions and events and remember some of the highlights of the past few months.

The outdoor season got off to a wet and windy start at the newly formed Bramcote Archery club with the first league shoot, which was well attended by the Counties archers and included a group of French Archers who were on an exchange visit to families in Gedling, they came from Vandouvre in France and they were keen to reclaim some glory after their defeat at Agincourt.

Little did we know that hiding amongst their numbers was a national team archer Sylvestre, who went on to win the gents recurve title by one point from Burton Joyce’s Dave Parker who was gutted to have been beaten by our French visitor.

Dave has assures us a rematch is on the cards and a return visit to Vandouvre is already being planned.

Wilford Bowmen with the help of AGB put on a fantastic WA 1440 shoot that was the envy of all who attended, I don’t know about anyone else but I could get used to the complementary gazebo’s and electronic scoring system which gave an instant leader board read out after every end shot and certainly made everyone hot foot it back to the shooting line to see where they were on the screens.

Burton Joyce Archers held the Tri Counties shoot and the day went well apart from just one small incident when a Nott’s compound archer was attacked by a large bumble bee the size of a small fruit bat which caused him to loose his arrow over the target, Lee the Bee as he is now affectionately known, still flinches at the slightest sound of buzzing and he has ditched the Hoyt bright red coloured headgear for something less insect appealing.

I would on behalf of the County like to thank all the clubs and individuals who have spend many hours organising and running shoots for us all to attend and also thank all the judges who give up many weekends to come and officiate at these competitions-Thank you all.

Next year is going to be a big year for Archery in Nottinghamshire and as such we now have a Nott’s Archery development officer in post and I wish Amy Curnock all the best for the coming year, and I hope we can work well together.

The WA European Archery Finals will put the spotlight on Nottingham with Europe’s best archers descending on the city next May, tickets going on sale soon and anybody who wants to help out can still register to help out during the competition.

Our very own winter development programme has now been finalised and is filling up fast, with sessions catering for coach development as well as individual archer coaching taking place, the sessions benefit from the grants won by our own development officer Mike Spare and monies have also been set aside for a subsidised level 2 coaches course.

A new level 1 coach course has already been fully booked with 12 candidates signing up, hopefully some of these people will go on to take the subsidised level 2 course.

The Nott’s senior and Junior teams have had mixed results and I thank everyone who turned out for their County team competitions, I would like to again congratulate our bare bow archers for winning the Senior Intercounties Thoresby bare bow trophy and I thank Steve Gamble, Octavia Quinn and Megan Purchase for their remarkable performance.