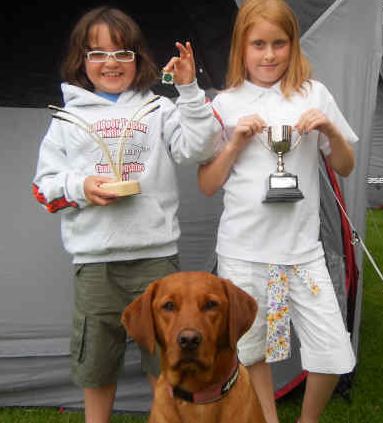 Hollie Smith (10) and Rebekah Lowe (9) took part in the Junior Fita Star and the Junior National Open Championships at Lilleshall on the weekend of 2nd and 3rd July 2011.  It was a lovely weekend, with unbroken sunshine throughout and soaring temperatures. With 70 targets and over 300 junior archers competing over the course of the weekend it was an impressive sight if not a little overwhelming for two young girls who had never taken part in an Outdoor National competition before.

Shooting the Metric V round on the Saturday, Hollie shooting a Compound Bow broke the existing national record for the 15m distance with a score of 337. She also broke the existing EMAS and Nottinghamshire County Record for the round of 1291 by shooting an impressive 1345 and was awarded the Willson Trophy.
Rebekah shooting Barebow broke the existing National Records for the 20m, 15m and 10m distances and went on to further increase the National Record for the round she set last weekend at the Emas Double Fita Star, by 35 points, setting a new National, EMAS and Nottinghamshire County record for Barebow of 1053 and was awarded the Barebow Trophy.

On the Sunday, Hollie was successful in shooting a new EMAS and Nottinghamshire County Record of 1250, for the Bristol V round, giving her second place to
Lucy Mason who managed to put in a perfect score of 1296.
Rebekah found the conditions on the Sunday challenging after her Saturday performance, but managed to complete the competition, achieving a silver medal place.

Not a bad weekend for them both: 1st place, 2nd place, National, Regional and County records and in addition a purple Rose for Hollie and a purple Cross for Bekky.

Congratulations to both girls.